The name derives from the medieval fortress built in the middle of the thirteenth century and called “Castello del Leone” for its pentagonal shape inspired by the constellation of the Lion.
Originally the fourth island of Lake Trasimeno, situated on a limestone promontory overlooking Trasimeno Lake,Castiglione del Lago is one of the most suggestive villages in all of Umbria. Immersed in the Trasimeno Regional Park, it is one of the coastal municipalities that characterize this protected natural area of incredible beauty. The town is part of Borghi più belli d’Italia.

The village – castle, surrounded by its walls, is dominated by the Medieval Fortress, with its Mastio. This triangular-shaped bastion stands 30 meters high and erected in the first half of the 1200s at the behest of Frederick II. It is connected by a long covered seventeenth-century corridor to the Palazzo Ducale Della Corgna, built in the 16th century, entirely frescoed by Niccolò Cirecignani known as Il Pomarancio. Inside the fortress are preserved the ruins of a church dedicated to Saints Philip and James, probably of Byzantine origin. Inside the castle walls, there is a suggestive amphitheater where art shows alternate. 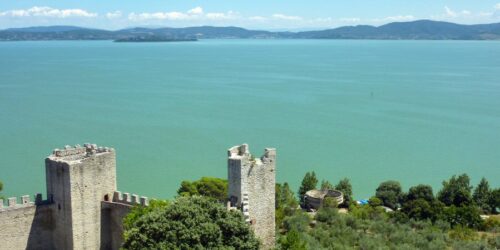 In addition to the unsurpassed spectacle of its particular nature, Castiglione del Lago offers the possibility of all water sports, such as sailing, windsurfing, water skiing, rowing, swimming; you can go hiking and mountain biking along the bicycle path that runs along the lake, there are also tennis, golf, and beach volleyball courts, riding stables.

Located not far from Lake Trasimeno, Paciano is a small medieval village, part of Borghi più belli d’Italia. Its historic center keeps intact its urban structure of ancient origin, which is articulated on three parallel roads connected by orthogonal alleys. These can be accessed from the Porta Fiorentina, Porta Perugina, and Porta Rastrella.

Kieran Mulvaney, writer and environmentalist, speaks about Paciano in the Washington Post: “my first thought when I arrived here is that it is exactly how a Hollywood set designer would represent a medieval village”.
the heart of the old town is palazzo Baldeschi headquarters of the information office and TrasiMemo, and a short walk to the Museum “Don Aldo Rossi”.In the alleys of the village you can find treasure chests: churches, decorations of madonnas, balconies, small commercial spaces for local food and wine and handcrafted products that together with the Town Hall building in Piazza della Repubblica deliver a harmonious image of the medieval village.

Visiting these areas is an opportunity to discover precious and often unknown cultural heritage, taste delicious local products and enjoy the landscape, for example along the Romea Germanica route, an ancient pilgrimage route traced during the 11th centurywhich from Stade (Germany) reaches Rome and passes through here connecting Castiglione del Lago and Città della Pieve.

The Umbria region, known as ‘the green heart of Italy’, is unique for the beauty of its landscapes and its culinary tradition.

Lake Trasimeno is located in Central Italy and surrounded by the great art cities this area between Florence and Rome is so famous for, places like Siena, Arezzo, Perugia, Assisi, Orvieto and Gubbio, all cities enormously rich in history and culture

With an area of 128 km2, it is the fourth largest lake in Italy and one of the most important lakes in Central Italy.Natural beauties and villages tell of a fascinating past with their towers and castles.Places of the Divine Painter, where Perugino was born and left works of inestimable value.

According to one legend, the lake is named after Prince Trasimeno, son of the god Tyrrhenian, who came on a visit to the lands of ancient Etruria and arrived at the lake. Because of the summer heat, the Prince decided to bathe. The nymph Agilla, struck by his beauty, seduced him with her singing. Entranced by her beautiful voice, Prince Trasimeno went further out into the water, where, overcome by emotion, he drowned. Since then it is said that on August evenings when a gentle breeze blows through the leaves of the trees, it is the lament of the nymph Agilla crying for her handsome prince. The name ‘Trasimeno’ may also derive from the geographical position of the lake itself: ‘Trans – Menio’, or beyond Mount Menio, as the mountain that borders the lake to the north was called in pre-Roman times. 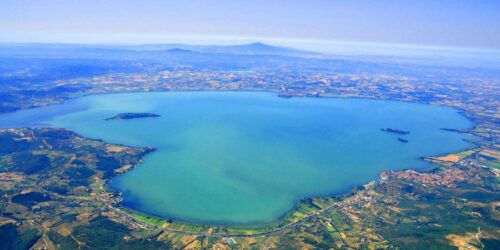 Isola Maggiore, the only inhabited one of the three islands. It still retains the atmosphere of the fishing village of the 13th century. Characteristic of the island is the craft production of Irish lace, a crochet lace-technique. Points of interest: Church of san Michele Arcangelo, the lace museum, the church of San Salvatore with its carved stone portal, the Captain’s Palace, the medieval Palazzetto in serena stone where the sculptor Bartocci lived,the chapel commemorating San Francesco d’ Assisi who went to island in hermitage in 1211,and the rock where the saint used to stop and pray.

Isola Polvese, the largest island in the Trasimeno Lake, offers a lush nature full of thousand-year-old olive groves. In addition to the beautiful sights there are also other points of interest: the Porcinari swimming pool, the Rocca, the ruins of the Olivetan church of San Secondo and the church of San Giuliano.

Isola Minore isprivate, not possible to visit and currently uninhabited.